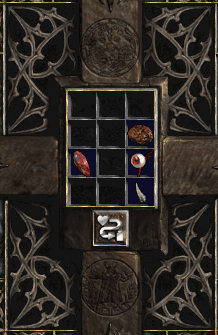 Additional facts about the encounter:
Diablo Clone spawns from a hooded man ("The Dark Wanderer") which is standing in the middle of the map - go near him to start the fight when you are ready. In the first phase Uber Diablo is immune to all damage and curses and spawns a huge amount of minions alongside him to fight you. The minions he spawns are called "Reanimated Warriors" (monster type: Reanimated Horde), which are undead skeletons with high physical damage and crushing blow which are also immune to curses and are highly resistant against any kinds of damage. They have an "undead" tag as all reanimated horde monsters do but don't have a charge attack. Allongside them spawn 3 "Undead Commanders", which are considered mini bosses with their prime evil tag on them. They are ranged undead creatures with high resistances, a slow aura (Holy Frost) which deal magic damage using the skill Guided Arrow. You need to kill all "Undead Commanders" and other minions to advance the fight to phase 2, where Diablo becomes vulnerable and loses its immunties. During phase 1 Diablo is able to attack and damage you constantly - you can not damage him in this phase at all until you defeat his minions. Diablo also emits a special red aura which reduces the maximum resistance cap of your character, mercenary and minions by 5%.