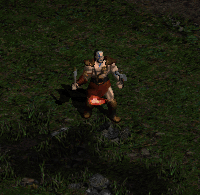 A Barbarian with a single Crimson Charge

Description: A powerful but reckless attack that increases damage and attack rating but decreases defense rating.

This move grants a Crimson Charge on attack which lasts for 7 seconds, stacks to a certain amount of charges based on level, and reduces your physical damage taken by 2% per stack.